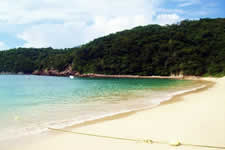 Santa Cruz Bay has several popular restaurants and hotels, Huatulco’s harbour from where most of Huatulco’s larger boat tours and cruise ships arrive and depart and, it is also home to some of the most popular beaches in Huatulco, La Entrega, Santa Cruz and Yerbabuena.

Tangolunda Bay is the location of most of the exclusive Hotels in Huatulco, it is also just a short distance from Huatulco marina and is home to Huatulco’s 18 hole Golf course. Most importantly however it is home to the five beautiful beaches of Tangolunda, Ventura, Manzanillo, Tornillo and Rincón Sabroso.

Find out more about Tangolunda Bay

Find out more about Chahué Bay 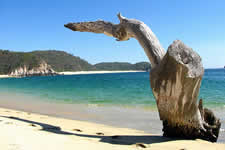 San Agustín is a large Bay that isn’t developed very much at all. It is ideal for SCUBA diving and relaxing on the tranquil beaches. There are some restaurants with basic bathroom and shower facilities. San Agustín also has some very basic beachside accommodation and camping. The main attraction of San Agustín Bay is the two beautiful beaches of San Agustín and Cacalutilla. 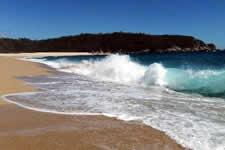 Cacaluta Bay is a stunning large bay, some revere it as the best beach in Huatulco and it is potentially most famous for its role in the Mexican film ‘Y tu mamá también’. It requires certain sacrifice to visit due to its relative inaccessibility. Cacaluta Bay has two pristine beaches Cacaluta beach and Arroyo beach.

Find out more about Cacaluta Bay 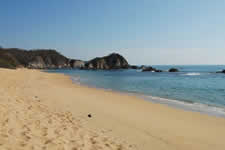 Conejos Bay is the most easterly bay in Huatulco and is still relatively untouched. Conejos Bay is ideal for SCUBA diving, snorkelling, fishing and of course swimming. The beautiful Conejos Bay consists of four breath-taking beaches, Conejos, Punta Arenas, Arena and Tejoncito.

Find out more about Conejos Bay 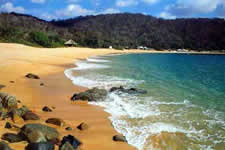 Organo and Maguey Bays despite being only a stone’s throw apart are actually two individual bays. Each of the two bays has one sandy beach, Maguey beach and Organo beach. Maguey is a very popular beach and has easy access via road or boat, Organo beach is a little trickier to get to.

Find out more about Organo and Maguey Bays

Riscalillo Bay is located between Chachacual Bay and San Agustin Bay, it has one spectacular beach of the same name and is perfect for swimming, snorklling, diving, and fishing. Riscalillo is Only accessible by boat.

Find out more about Riscalillo Bay 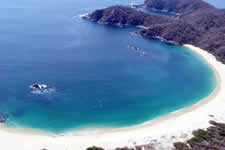 Chachacual is a beautiful remote bay comprised of two idyllic beaches, Chachacual and La India. Access to Chachacual bay and its beaches is via boat only meaning that if you want a bit more privacy these beaches are a perfect choice for you.

Find out more about Chachacual Bay

A map of the Bays of Huatulco

The Weather in Huatulco

Go back to Oaxaca’s beaches

Create your own review
Things to Do in Oaxaca
Average rating:   0 reviews

Online Spanish Classes from anywhere in the world from the comfort of your living room via professional virtual classroom software with full audio visual integration.
www.spanish4you.co